The annual FBI Indianapolis Citizens Academy Alumni Association Fall Reception was a wonderful opportunity to connect with fellow alumni and FBI friends and to learn more about interesting topics.  At this year’s FBICAAA Fall Reception, SAC Grant Mendenhall and the FBI’s partners at the United States Attorneys’ Office spoke about the ways they work together to keep Indiana safe.  The event was held at the Indiana World War Memorial in downtown  Indianapolis on November 13, 2018.

June 27, 2017 was a day to remember…. For many Citizens Academy Alumni, it was a moment to reflect on all of the support given by SA Drew Northern. Over the years, he has continued to stay engaged with the Alumni Association and the benefits of his involvement are truly felt. Drew, we all wish you the most in your new endeavors, and will forever be grateful for the time and attention you’ve given us. 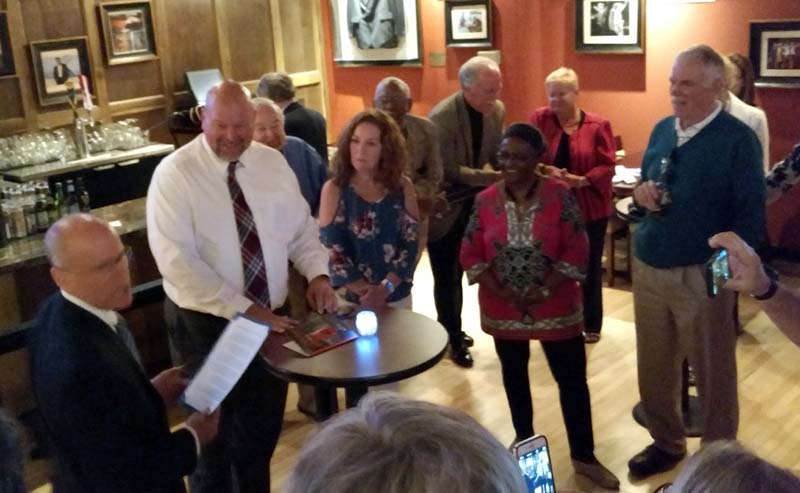 Thank you, and good luck in your new phase of life. We will miss you!

The FBI released a new bank robbery app for iPhones and Android smartphones that was designed internally within the FBI.

This app should make it much easier for the public as well as financial institutions, law enforcement agencies and others to view photos and information about bank robberies in their geographical area. The app, which works with bankrobbers.fbi.gov, can be downloaded at no charge from Apple’s app store or Google Play. You can also click on the links provided to access the app.

To read more about this effort, please click the FBI release below:
https://www.fbi.gov/news/stories/fbi-releases-new-bank-robbers-mobile-app

More than 25 academy members and guests attended an informational presentation called Chasing the Dragon: The Life of an Opioid Addict. With the current epidemic of prescription drug and opioid cases, death from overdoses is now one of the leading causes of death in the U.S. The FBI and the DEA have produced a documentary, which the group was able to preview, that’s aimed at educating students and youth about the dangers of these drugs and their often-tragic consequences. After the screening, Special Agent in Charge Jay Abbott and Assistant Special Agent in Charge Greg Massa offered remarks and encouraged the group to help spread the word about this available presentation to local schools and educators.

Massa told the group that Indiana leads the nation in pharmacy robberies and said, “We are losing the war on drugs.” Abbott added that,” We can’t arrest our way out of this problem, so a big part of the solution has to be prevention.”

For more information on Chasing the Dragon and to view the documentary and download a study guide, visit
https://www.fbi.gov/news/stories/raising-awareness-of-opioid-addiction

The 2017 Awards banquet was and event of many warm faces. It was the first time I had ever attended the celebration, and I was grateful to feel welcome and “in place.” I must admit, being surrounded by our local law enforcement, emergency support practitioners, and public safety professionals felt really good! It reminded me, that there is a community of men and women who live daily to do nothing more than protect us, and that they still walk with smiles on their faces and a warmth of service in their heart. Before taking my seat, I chatted with several individuals to learn of their service careers and the motivation for getting into their chosen profession. More often than not, it was defined as a “calling.” No one can defy a strong “calling,” so I smiled with a big heart and offered by gratitude.

Jeff Harrison of Citizens Energy Group (the signature sponsor) was an amazing host, and kept the crowd in giggles. The ceremony began with a moment of silence to remember the lives of loved ones and fellow public service professionals lost in the line of duty. Not long after, Mayor Hogsett addressed the crowd with an undying conviction of support from his Administration. His support of these professionals was assuring to many ears, let alone mine.

When I looked around, I realized that the room was filled with more than 300 men and women who extinguish our fires, respond to our emergency calls, and arrest the bad guys (and gals). It was amazing to see how many citizens chose the life of public service. When the moderators Erica Flye and Rafael Sanchez, opened the podium with the presentation of awards, they too, began by professing their gratitude for the public service professionals in the room.

The “winner” of each award was kept unknown until one of the moderators read their story. I recall gasping at times while listening to the stories because I was amazed at just how far some go to save the life of someone else. It takes someone special to want to serve their community, and like many other professions, it will have its challenges. In the end, ladies and gentlemen, I am grateful, I am thankful, and I appreciate living in a community with individuals that (aside from its hiccups and its issues) still look to serve, protect, and defend within this state of Indiana.

Did you know you could have FBI Indianapolis news delivered straight to your inbox?  Or you can get national FBI news on Facebook and Twitter!  It’s simple… find out more at:  https://www.fbi.gov/e-mail-updates 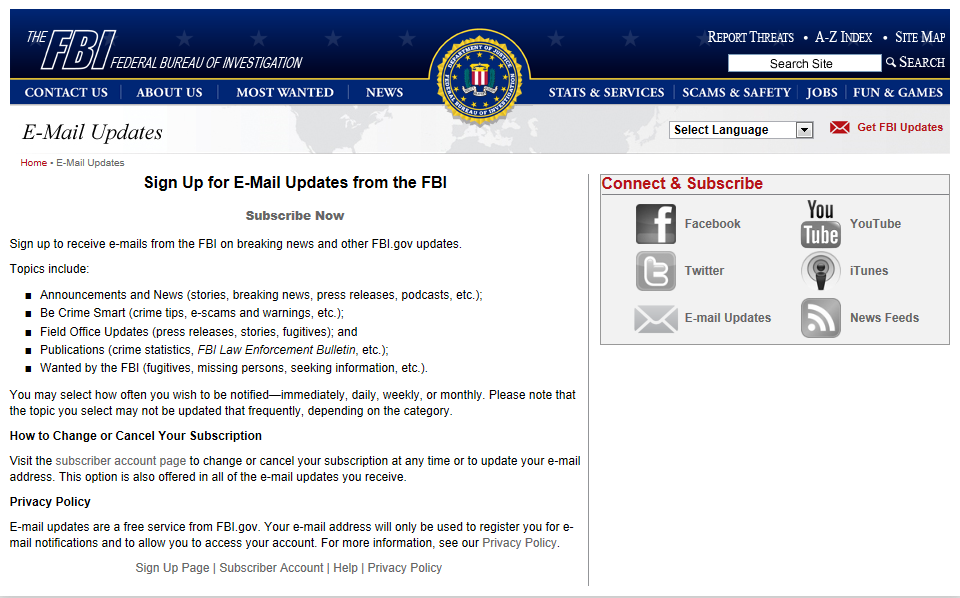 In July 2015, the FBI hosted its 9th annual FBI Youth Leadership Academy – a program made possible through the Citizens Academy’s sponsorship.  The three-day camp offered 20 top-notch Indiana high school students the opportunity to learn about the FBI and hone their leadership skills.  Through interactive physical challenges and classroom discussions, students put into practice the theme of “Learn, Do, Inspire.”  The program focuses on building skills such as teamwork, decision-making, goal setting and character leadership.

FBI Director James B. Comey called on the nation’s law enforcement personnel and the citizens they serve to participate in a frank and open conversation about the disconnect that exists in places like New York City and Ferguson, Missouri—and many communities across the country—between police agencies and many citizens, particularly in communities of color.

In a speech today at Georgetown University, Comey said the lethal police encounters involving Michael Brown and Eric Garner—both African-Americans—the ensuing protests across the country, and the assassinations of New York Police Department Officers Wenjian Liu and Rafael Ramos have put the fundamental relationship between police and their constituents at a crossroads.

“As a society, we can choose to live our everyday lives, raising our families and going to work, hoping someone, somewhere, will do something to ease the tension,” Comey said to the Georgetown students and faculty. “We can turn up the music on the car radio and drive around these problems. Or we can choose to have an open and honest discussion about what our relationship is today—what it should be, what it could be, and what it needs to be—if we took more time to better understand one another.”

The speech, entitled “Hard Truths: Law Enforcement and Race,” sought to move the ongoing debate about race and the character of law enforcement officers to a more productive footing, where police and citizens acknowledge a few elemental “truths” in an effort to better understand each other. The Director began by acknowledging law enforcement’s own spotty history, including police bias a century ago against Irish immigrants—from whom Comey descended—and the FBI’s surveillance of civil rights leader Dr. Martin Luther King, Jr.

Comey then raised the subject of the unconscious racial bias within all of us, but said it’s how we behave in response to it that defines us. He said racial bias is no more prevalent in law enforcement than anywhere else. “In fact,” he said, “I believe law enforcement overwhelmingly attracts people who want to do good for a living. They don’t sign up to be cops in New York or Chicago of L.A. because they want to help white people or black people or Hispanic people or Asian people. They sign up because they want to help all people.”

That being said, many police over time develop different flavors of cynicism—lazy mental shortcuts, Comey said, that we have to resist because they can lead to over-generalizing. “We need to come to grips with the fact that this behavior complicates the relationship between police and the communities they serve.”

Still another hard truth, Comey added, is the recognition and need to address the disproportionate challenges faced by young black men in struggling communities—inadequate education, jobs, and role models. Too often, he said, they inherit a legacy of crime and prison. “Changing that legacy is a challenge so enormous and so complicated that it is, unfortunately, easier to talk only about the cops,” Comey said. “And that’s not fair.”

Comey said law enforcement needs to better “see” the people they serve. And to that end, he is urging police departments to provide the FBI, through our Uniform Crime Reporting Program, with better, more complete data, such as demographics and circumstances, which could shine more light on incidents where force is used by police or against them.

But the “seeing” needs to flow both ways. Citizens need to understand the difficult and perilous work of law enforcement. “If they take the time to do that, what they will see are officers who are human, who are overwhelmingly doing the right thing for the right reasons,” he said.

“We all need to talk and we all need to listen,” Comey said in closing, “not just about easy things but about hard things, too. It is time to start seeing one another for who and what we really are.”

The Indianapolis and Boston Citizens Academy Alumni Associations engaged in a friendly exchange over the 2015 NFL AFC Championship game held Sunday, January 18, 2015 between the New England Patriots and the Indianapolis Colts.

As the Indianapolis Colts fell that Sunday, John McCreary supported the camaraderie between the chapters and grabbed a deflated football and donned a New England Patriots t-shirt for the board meeting held Thursday, January 22, 2015. He is pictured with fellow board members; next to John is President Elect, Susan Woodhouse holding an inflated football.

Aside from light-hearted competition, this represents an opportunity for chapters to demonstrate they are part of a larger nationwide organization that seeks to promote a greater understanding of the FBI.

Director James Comey spoke to attendees via Skype.  It was the first time a Director had addressed a Leadership Conference.  The Director spoke about top mission priorities and how the Citizen Academy Chapters supported the FBI’s mission through its nationwide community outreach efforts.

The event was filled with informative briefings including “best in class” community engagement projects; and an overview of the Child ID Program.  During one afternoon the delegates participated in a Community Engagement Project for Gleaners Food Bank.  The event saw 542 boxes packed with canned goods that will provide up to 2,500 meals for needy families.

Social events provided delegates an opportunity to interact and exchange ideas.  One highlight was a visit to the Indianapolis Motor Speedway for a lap around the track and a chance to kiss the bricks.  Dinner was served in the Hall of Fame Museum.   The last evening consisted of a dine-around at seven downtown restaurants; the night was a huge success.

Other highlights included our SAC Jay Abbott’s luncheon address and his involvement in the “Shoe Bomber” case.  Indianapolis was one of eight Chapters recognized as Chapters of Distinction.  And lastly, our own Hugh Baker was elected to the FBINCAAA Board.

A special thank you to Susan Woodhouse, who took the lead in organizing the conference.  Also kudos to Libby Roberts, Hugh Baker and Kathy Sipes for their tireless efforts, which resulted in our chapter raising the bar for all future conferences!  Hoosier Hospitality was on full display! 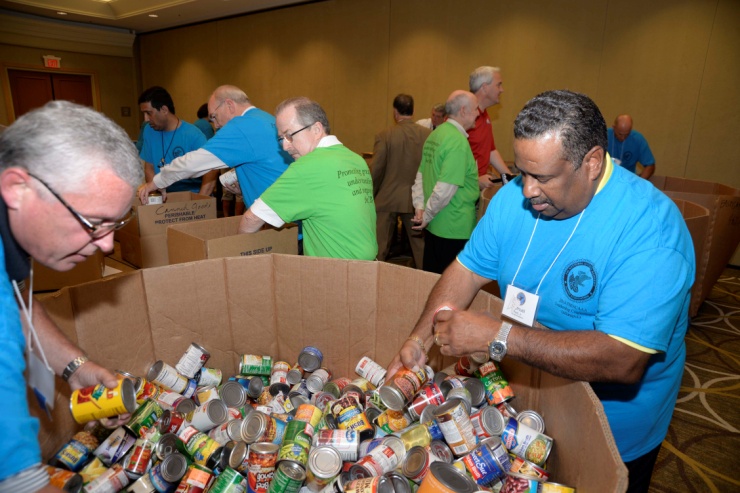 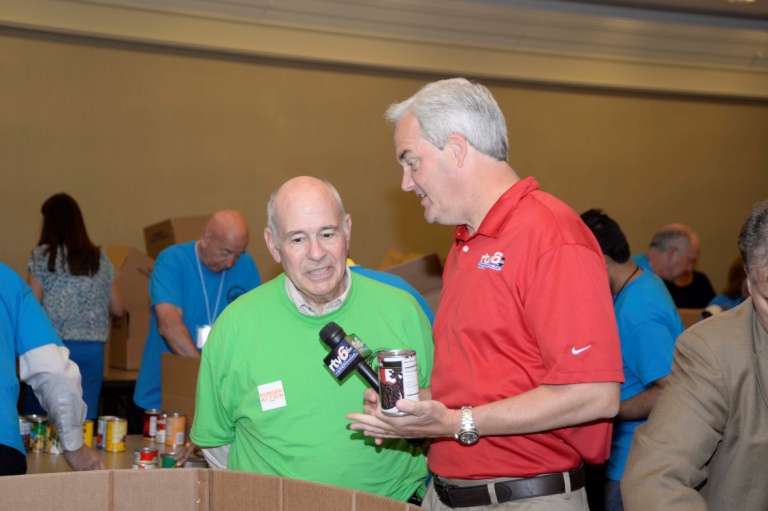